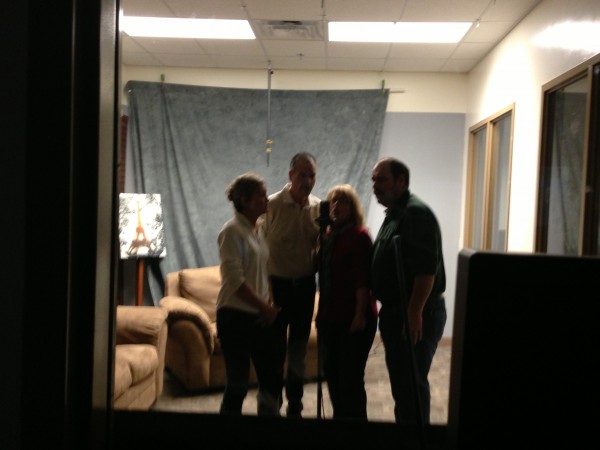 “Ezekiel 33 is a ministry before anything else…four folks choosing to spend a lot of their time practicing and performing for the glory of God and the furthering of His Kingdom,” said Lee Culberson.

Lee & Lee Culberson met in preschool in Florida and began singing together at Happyland preschool (really!). Throughout elementary school they stood side by side in the select ensembles and sang their hearts out. As they grew older, they were still great friends, but went on a couple of different paths: She-Lee – instruments (keyboard, woodwinds) and debate, He-Lee – pure vocal training, chamber music, many all-state vocal competitions.

But God had bigger plans for them. In their senior year of high school they began dating and got married soon after. College and work took up a lot of their time, but on their second anniversary they went to Dollywood in Pigeon Forge, TN, and watched the Kingdom Heirs perform live. That was their first introduction to the glory of Southern Gospel music!

They returned from the vacation changed musically and immediately started working on Southern Gospel duets to perform in church. This was a new type of music in their church, but it was embraced. Soon, they asked the local band director (a bass) and a fabulous soprano from the choir to join them as a mixed quartet.

Soon Lee and Lee moved to the Atlanta area for jobs and their fledgling quartet disbanded. However, it did not take long before they found a new church home and started up the quartet again, bringing in Suzanne Williams as the soprano and John Timms as the bass. “We knew when we got to Georgia that we had to answer the call. Just because we moved didn’t mean that Southern Gospel music wasn’t still a huge part of our lives,” said Lee (she). “We couldn’t NOT sing, and we were blessed with John and Suzanne. It was a powerful ministry, and when we reached out, John and Suzanne answered.”

After a couple of years singing together and ministering throughout the Southeast, John was diagnosed with cancer and went home to sing bass in God’s choir. It was a trying time for the group, but Dale Michaelson stepped up to carry on John’s legacy in Ezekiel 33 and to help the group serve the ministry needs of all types of venues and events across GA, FL, AL, TN, SC, LA, MS and NC.

Ezekiel 33 was born out of an authentic desire to use God’s gifts not to further our own desires, but to make disciples of Jesus Christ. Music can bring the message and touch the heart in a way that few other things can. We are powerfully humbled to use it for God’s kingdom. We look forward to worshiping with you!

Read more about the Ezekiel 33 members.